The Magrav Reaktor is an arrangement of copperwire that is wound into coils, nanocoated in order to change the molecular structure of the surface of the wire and then combined with Gans Material and plasma capacitors. It was developed by the Keshe Foundation in order to achieve many different effects. With it´s design it copies one of the basic principles of the universe and it becomes a reciever for the surrounding free plasma which can result in savings on your electricity bill.

The Magrav is based on the magnetic-gravitational principle (push/pull – give/take – repulsion/gravity). Through a thermic (fire) or a chemical process (exposure to sodium hydroxide for weeks/months) a black graphene-like layer forms on the surface of the copperwire (which consists of copper(I)-oxide [Cu2O] und copper(II)-oxide [CuO])*1 and is hereby referred to as nanolayer – see picture below). These layers act a a carrier or a conductor for the transmission of magnetic and gravitational fields. These gaphene layers also now behave as both an insulator and a superconductor*². So plasmatic magnetic fields (pmtics) are recieved from the environment and held inside, but yet there´s no resistance to the current. The quantum fluctuations within these graphene layers are so strong that the normal magnetic order is being supressed*³ . You could say that the molecular structure of the copper opens up in this process. This means that the spaces between the atoms of the nanolayer are growing and this creates a kind of field in which unusual so called quantum-effects can be observed like superconductivity or the creation of current from „space“ which is actually the free plasma. 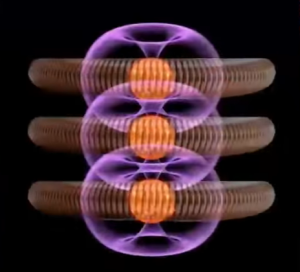 This is also known as the Meissner Effect (wikipedia), which connects to what was known as the aether a hundred years ago and is now referred to as „quantum fluid“ in mainstream physics). Plasmatic magnetic fields (Keshe calls them pmatics) collect within these layers and are being transported along the wire, but cannot be released due to the insulating properties of nyno layers. The plasma interacts with the frequency of the electrical current, which is usually 50-60Hz in Europe and it ajusts to that. In the optimum case it will now autonomously produce additional electricity so there´s less consumption from the grid. On top of that the house wiring will gradually be nanocoated too, so after some time it can act as a plasma reciever even without the Magrav being connected.

surface of the graphene-like layer under a microscope

Keshs enhanced approach to physics and metaphysical phenomena is only partly based on the mainstream view of purely material, atomistic perception of the universe. It´s mainly based on plasmatic magnetic fields which form the magnetic fields thet we know. Through morphic resonance even our mind will interact withthose fields and add impulses which can affect performance. Intention and thankfullness  – or more precicely their corresponding emotions – play a major role in these applications – just as in life in general. There are similarities to certain quantum-effects like the double-slit experiment, which shows that the observer affects the outcome  and is therefore directly connected to it´s environment. This is a hardcore fact even in ancient metaphysics, but it´s not being thought in school these days.

Further observations and optimisations of this technology are in process and are being presented on a regular basis from users of the Keshe Foundation itsself (like The Magrav V2 or the Star Formation). This is only one of the many applications of the plasma technologie. It has proved to be usefull in agriculture, transport & health.

„The reactors you are building is not a generator. It´s a reciever. And I am trying to show you how to tune into the solar system – into galaxy´s energy field – that you can recieve anything you like…. you have to tune into the magnetic field strenght of the sun.  When you tune your frequency of your radio to a certain channel you recieve a message. This is the same thing.“ Mehran T. Keshe talking about Magrav Reactors